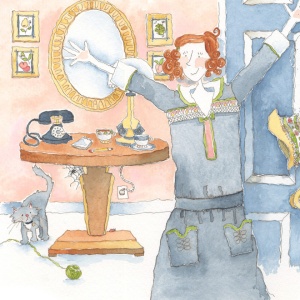 A young boy’s enthusiasm to spend time with his parents is continually disrupted by everyday life, especially the seemingly constant consumption of tea.

When he cleverly arranges a way to get their full attention, his plan doesn’t work out exactly

as he intended, but his parents are there when needed most to assure him of just how important he really is.

When mommy got home from work today
she was “oh, so tired” and couldn’t play.
I had hoped she would go on a bug hunt with me,
but she just needed to relax, with a “nice cup of tea”.

Perhaps she could play after she rested a spell,
but just then I heard the front door bell.
It was Aunt Margaret, full of kisses and hugs
I’d rather have mommy help me search for some bugs.

So while I searched alone for spiders and flies,
Aunt Margaret and mommy drank tea and ate pies.
I invited them both to hunt for ladybirds with me,
mommy said “give us a minute while we finish our tea.”

Then finally Aunt Margaret was saying “goodbye”
she had one more large biscuit and the final mince pie.
Now mommy could have some fun time with me,
as she could not possibly drink any more tea.
So as mommy and Aunt Margaret hugged at the door,
I imagined that together we could draw a dinosaur.
I dashed to the playroom to get art supplies,
but I heard a “Hello” amid all the “goodbyes”.

Who on earth could this now possibly be?
It was time for mommy to spend time with me!
I stormed around the corner feeling rather berzerk,
and was oh so relieved to see daddy just home from work.

Now the three of us could draw a huge dinosaur,
with enormous claws and great giant ROAR!!
But daddy was weary and as he kissed mom and me
he asked if he could just, “have a nice cup of tea”.

Once again my adventures were undone by the kettle,
it gets so much use, now I know why it’s metal.
I just wanted to have, a little bit of fun
before it’s bed time and the whole day is done.

Then it occurred to me, what could work out just right,
as I knew that they would drink tea later tonight.
I would make up some treats, rather confidentially,
and invite them both to “My Tea Party”.

So while daddy showered and mommy did her chores,
I prepared the treats behind closed kitchen doors.
I put loads of biscuits on a gold serving plate,
though not quite as many as Aunt Margaret ate.

All around the table I sat my favourite teddies,
and just for show I sprinkled confetti.
The setting was really such a glorious sight
“My Tea Party” would be the most perfect night.

With no time to waste mommy and daddy were invited,
when they entered the room they were very excited.
But just then, it suddenly occurred to me,
that I had forgotten to make a pot of tea!

My Tea Party was ruined and I wanted to cry
I could feel a teardrop or two well up in my eyes.
I thought for sure they would put the tea kettle on,
and that would be it, the day would be gone.

But mommy smiled brightly and held me so close,
while daddy hugged me tightly and then blew my nose.
Instead of having just a plain cup of tea,
they said that they’d rather, have a special “cup of me”!